Here’s our weekly round-up, giving you a quick update on the latest and most interesting campaigns in the world of ecommerce and digital marketing.
Since Christmas is scarily close (where has the year gone?) for this week’s round up we thought we’d focus on the the festivities.
Brands love communicating with their consumers and getting creative at this time of year so let’s have a look at some of our favourites!

When I think of the holiday season I associate it with festive goodies and chocolate treats and I think i’m not the only person as confectionary brands have been going all out on social media this festive season.

Such as Cadburys, introducing a Cadburys Cadvent calendar on their Instagram! This social media campaign consists of regular fun and festive videos counting down to Christmas day.

In these short clips, Cadburys are giving festive themed experiences to their consumers, such as delivering snow for a white Christmas or hosting huge parties for friends and families.

Of course, there are some tasty looking Cadburys treats featured within the Cadvent videos, encouraging customers to go out and buy some chocolate… who doesn’t love chocolate? This cadvent is almost is good as the real Cadburys chocolate advent calendars!

Lesley wished for a white #Christmas and we brought a taste of Lapland to her home! #Cadvent

How to Eat Reeses

This social media campaign launched on Black Friday. It features funny ways in which people enjoy their peanut butter treats, for example ‘How a gardener eats Reeses’.

The video features a gardener planting Reeses pieces and a chocolate Christmas tree grows from the ‘seeds’. The idea for this campaign is to push the idea that there is no wrong way to eat any confectionary from Reeses!

It’s a fun festive campaign but also has the potential to run all year!

How a gardener eats a Reese’s. #NoWrongWay

As the festive season is the most fashionable time of the year it makes sense that there are a lot of fashion brands promoting different campaigns at this time of year.
H&M have released their Holiday campaign collaborating with Jesse Williams and Nicki Minaj. This is suitable following the release of her H&M ‘Nicki X H&M’ clothing collection.
The advert (or mini movie as its three and a half minutes long!) is called a ‘A Magical Holiday’ and of course, has a festive theme. In short, a little girl, who for the purpose of the advert is Nicki Minaj and Jesse Williams’ daughter, dives into a parallel universe and defeats an evil version of Santa Claus who is trying to ruin Christmas, all while wearing some fabulous H&M clothes of course.

It seems that these campaigns have helped to get people spending with the latest data revealing that from November 1st to December 17th online shoppers have spent over $89 billion!

This is getting close to the $107.4 billion spend that Adobe predicts to have been spent by December 31st. Could this be exceeded?

Accenture’s Holiday Shopping Survey shows that more than one in four (29%) of shoppers plan to do their holiday shopping on Christmas eve!

Are you one of those last minute shoppers? 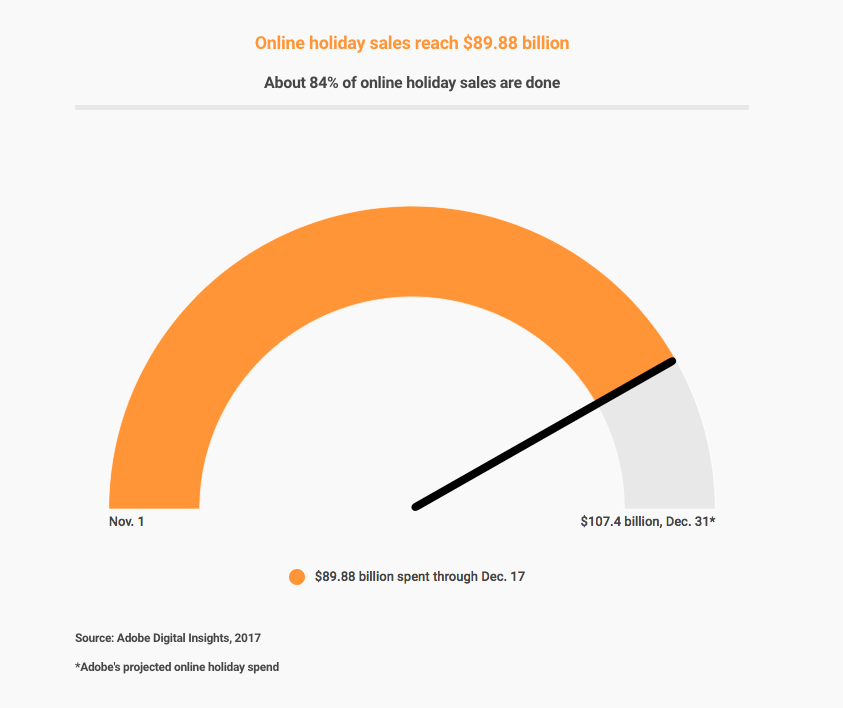 [/one_half_last]
Well, that’s all the festivities this week, wishing you a very merry Christmas and a happy New Year from all of us at SaleCycle!
Be sure to come back in 2018 for more updates in the world of ecommerce and digital marketing.