In this post we round up some essential email marketing statistics from around the web, updated for 2020.

In this post, we look at everything related to Black Friday ecommerce. what customers and retailers think, best practices for Black Friday promotions, and much more…

Data Privacy legislation such as GDPR and the planned California Consumer Privacy Act (CCPA) have thrown down a challenge to email marketers.

One year on from the introduction of GDPR, we surveyed marketers about how they’ve adapted to the new rules.

In this article, guest blogger Kevin George from EmailMonks discusses how artificial intelligence helps email marketers to enhance their subscriber engagement.
Artificial Intelligence is an interplay between the pursuit of goal, processing the data used to achieve that goal, and acquisition of data to discern the goal better.
It does not have much to do with human intelligence, except that it is sometimes modeled to simulate the characteristics of human intelligence like reasoning, separating fact from belief, and seeing relationships.
As the technology of artificial intelligence is gaining immense popularity, marketers are incorporating it in almost every digital communication sent to the subscriber. Email marketing has not remained an exception. Artificial intelligence allows email marketers to create more human email copy that is scalable and allows for automation.
So, how can brands use AI to boost their email engagement? Let’s unravel the opportunities.

In this infographic, we look at how email can be used throughout the customer journey, pre and post-purchase. 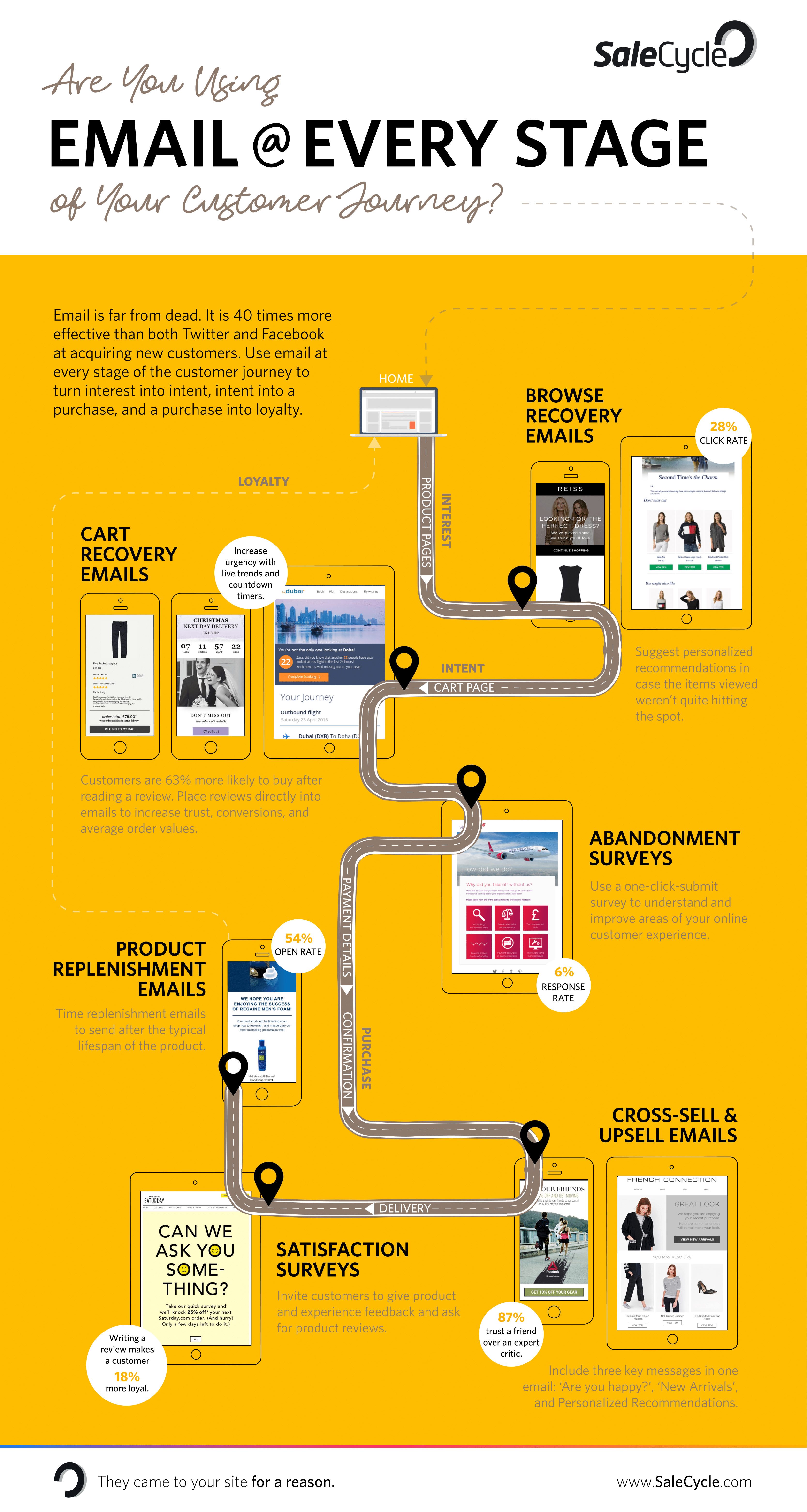 Why consumers unsubscribe from retail emails, and how retailers can minimise this through more relevant and timely communication.
According to a survey from Engage Hub, 90% of consumers have unsubscribed from retail emails in the past 12 months.
Among the main problems cited by the survey respondents were too many emails, or emails not being relevant to their interests.
46% said they receive too many messages – 26% said they get messages from some retailers at least once a day, while 15% receive more than that.
This is a common complaint from customers, and retailers do have to consider email frequency. Consumers will always report that they receive too many emails, but retailers need to study their results to decide on this.
There’s a balance to be struck between sending too many and running the risk of pushing up unsubscribe rates, and missing out on opportunities to sell by sending too few.
Retailers can also send too many of the same type of email. For example, Gap sends emails advertising sales and special deals several times a week, thereby lessening the effect of the tactic.

I’d argue that relevance may be a bigger issue here. For instance, I’ll ignore the majority of Gap’s emails as there’s only so many shirts you can buy, but I will take note of them when I’m looking for new clothes as they are then relevant to me.
Indeed, 24% of respondents in the Engage Hub survey have unsubscribed due to irrelevant emails, and a similar pattern is shown in a recent MarketingSherpa survey: 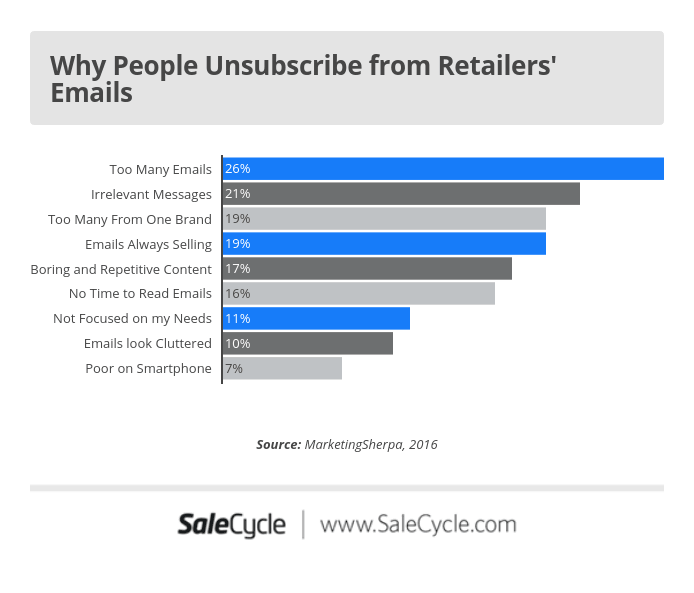 Marketing Specialist Nash is back and this time she’s tackling the online checkout process with 7 optimization steps!
I can’t speak for everyone, but there have certainly been times when a long, overly complicated checkout process (I nearly had to paddle through) turned me away from completing my purchase. Why is this so long and awkward? And are all these steps necessary?
I guess the most important question is, does it have to be this way?

Content Marketing Specialist Nash takes us through her 7 favorite email remarketing headlines and what makes them so great!
Great email remarketing means getting your customers attention… and fast. And while the focus is often on subject lines to get emails opened, we’re going to take you one step further!
Inspired by some of our favorite brands, here’s 7 of the most effective headlines you can use in your cart abandonment emails to re-engage your customers and get them back to purchase!